Here at The Rewind Movie Podcast, we started our Pulling Focus series so that our hosts could recommend to each other to films that had so far eluded them – to date, I’ve introduced Gali to the transcendent, meditative Glasgow-set drama Ratcatcher, and in return he suggested Curtis Hanson’s charming literary gem Wonder Boys. As we returned from our extended summer break to the bleak, dark evenings of October, rifling through my mental rolodex of potential episodes my thoughts turned immediately to horror films, specifically to a film which has haunted me since my first viewing over 15 years ago: Kiyoshi Kurosawa’s Kairo/Pulse.

In this episode you’ll hear our thoughts on that film, but as myself, Gali and our good friend and fellow horror fan Matt started our discussion, we realised that we should really give some historical context to its appearance on these shores. Specifically, the sizeable impact made by its forerunner, Hideo Nakata’s chilling Ringu or Ring, in ushering in an acquisitional boom of Far East and Asian “Extreme” cinema led by British producer and distributor Hamish McAlpine’s Tartan Films. In arranging for both Ring and Ring 2 to screen at Edinburgh Film Festival in 2000, McAlpine helped kickstart a craze whose legacy can still be felt across the genre – both positive and negative, depending how many desperate ripoffs featuring lank-haired wraiths you’ve had to slog through at horror film festivals and in the lower reaches of streaming services over the years. 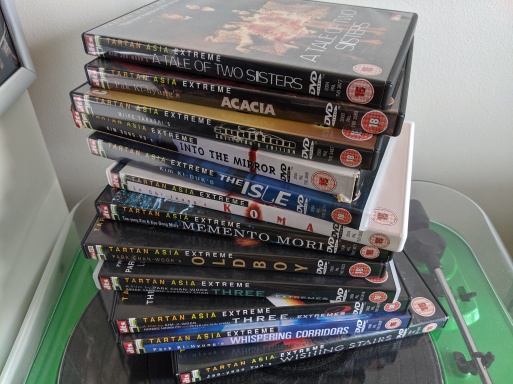 I was a voracious collector of Tartan Asia Extreme DVDs over the years following a revelatory first viewing of Ring back in 2002, and the discussion the three of us had in this episode got me thinking about that label, which I held in such high regard that I would frequently buy titles sight unseen based on nothing more than blind faith in McAlpine and team’s immaculate good taste (or in the case of some of the label’s more outré, grimy output, carefully curated bad taste). In the episode, I wanted to purposely limit the discussion to Japanese horror of a specific type – contemporary-set, but classically influenced, ghost stories, or kaidan-eiga, as background to introducing Kairo, including the hugely successful later entry to the genre, 2002’s Ju-On, directed by Kiyoshi Kurosawa’s one-time student Takashi Shimizu. But the Asia Extreme label would range far and wide, notably buying up titles from the rapidly emerging South Korean film scene spearheaded by the likes of Kim Ki-duk, Kim Jee-woon and the breakout star of the group, Park Chan-wook, as well as the more established Hong Kong market and, largely courtesy of the Hong Kong-born twin brothers Danny and Oxide Pang, Thailand.

In our discussion, the three of us agreed that our respective first viewings of Ring gave us all a wonderful sense of seeing something completely new, a visceral feeling of being off the beaten track in terms of what we were seeing and how it would play out on screen. I’d dare to suggest that if you’re reading this and you also watched this film in the time between its appearance in your country and the release of Gore Verbinski’s expensively mounted remake The Ring in late 2002, you will be familiar with that feeling. And those years spent rifling through the meagre stacks of foreign language DVDs in my local HMV branches in Darlington and Leeds in the early part of the 2000s were a vital and unforgettable part of my foray in to cinema, as I chased that same feeling of pure discovery of films which were disquieting, shocking, outrageous, and, most importantly, different. I found it time and again, discovering vital new artists like those listed above, and gained a window in to film languages and styles far beyond anything I had ever seen in my narrow, Hollywood-centric experience to date.

But while always on the lookout for something new and exciting, in retrospect the idea that Asia as a whole could be lumped together as a mysterious, far-off land where an unending stream of unpredictable, terrifying films emerge whole cloth could be seen now as very reductive. Psychological thrillers bump against violent actioners and horror films pulled from various local mythology and cultural histories, and those shades of difference between the different national provenances, and the creators’ individual voices, could easily be lost when labelled together as a collective set of Weird Movies. Perhaps we were at risk of othering, of seeing a distorted and somewhat simplistic view of a whole region, and of disregarding the distinct styles and creativity of the filmmakers who operated within each country’s film scene. And in focussing so relentlessly on the more saleable ‘shocking’ films while ignoring more relatable or humane movies, it could calcify that perspective by failing to bring balance to our understanding of the countries in the region.

None of this is meant to diminish the great work Tartan Films did over the years, to which my still-groaning DVD shelves will attest. On the whole, great care and attention was given to each film, with detailed liner notes and bonus features intended to give some context to the films which, if the viewer so chose, could lead to a rabbit hole of discovery both cinematic and cultural. In those days, I was something of a luddite (i.e. too poor/lazy to own a laptop), resolutely offline and reliant on these vital glimpses of context to understand these films a little better, and to dig around to try and find the threads of influence from one generation of filmmakers to another, and of the cultural climates that helped produce the films that reached across language barriers to gleefully scare the shit out of me. And, in time, my tastes widened to explore those more humane and relatable movies; genre cinema offered a vital gateway to greater understanding of world cinema as a whole.

My obsession with these films touched off a long-running interest in Japan, which culminated finally with me getting the chance to live there for a spell a couple of years ago. I’ll freely admit that this interest began almost entirely with a fascination for all things horror. I even went out to Tokyo and had a yūrei tattooed on my arm. There’s always a fine line to be trodden when it comes to indulging an interest in aspects of a foreign culture, a risk that I’m indulging in exactly the kind of othering and condescension that has plagued Western perspectives on Eastern cultures for centuries. But I hope that my curiosity is benign and respectful. Certainly, living and working day-in, day-out in a small Japanese city, chatting to people from all walks of life, revelling in the experience of slipping in to a routine somewhere so far from home and still feeling at ease, dispelled any remaining illusions I may have had about the “mysterious East”. And in learning more, about normal day-to-day life in Japan and about the cultural history that informed these J-Horror classics, I can happily say that rather than this knowledge diminishing the mystery of the films, it only serves to deepen the experience of watching them. Their power is not based on some sort of inherent weirdness of an ‘alien’ culture – it’s the result of the talent of the artists that created them. Whether they hold up today, or have dimmed over time and been diluted by repetition of genre tropes, their work deserves to be judged on its own terms.

Finally, we of course had to mention the remakes of our featured titles. When Hollywood decides to cash in on your work, you know you are part of a bonafide phenomenon. We tried our best to be even-handed when judging their relative merits, although we’ll leave it to you to decide whether we succeeded.

For those interested in some of the topics we touched upon in the episode, I’ve included a few links for you here. For a great starter on the topic of ghosts in Japan, I’d recommend Yūrei: The Japanese Ghost by Zach Davisson. A fantastic overview, it’s an ideal jumping off point for learning more about the prominence of ghosts and the uncanny in Japanese culture over the years.

Since the untimely demise of Tartan Films, Arrow Video have taken up the baton in a spectacular way. Their library of exceptional Japanese genre titles (including Pulse and the Ring trilogy) is virtually unmatched, and their lavish physical editions on Blu-ray and DVD include even more additional material than those great Tartan Films DVDs did. For those who prefer a clutter-free film experience, they have an Amazon Prime channel, with the majority of their titles available to stream. Outside of their admirable Japanese film collection, virtually their entire catalogue is a treat.

Andy Richards’ Asian Horror is as good a primer as you could ask for if you are looking to expand beyond the famous titles we have discussed here, and learn more about the careers of the most prominent directors of Asian horror. It’s a concise and useful gateway to some seminal films.

If you want to dig deeper, Midnight Eye is a website dedicated to Japanese cinema, created and operated by two writers whose knowledge and skill I couldn’t dare hope to get anywhere near – Tom Mes and Jasper Sharp. Sadly ‘retired’ back in 2015, its articles remain online and are an unparalleled resource for Japanese cinema and genre cinema in particular. Both are published authors: Mes with, among many others, the definitive book on the exploitation legend and erstwhile Lady Scorpion Meiko Kaji, and Sharp with a phenomenally weighty tome exploring the murky world of Pinku Eiga, or Pink Cinema – a wild mashup of erotica and genre cinema that churned out hundreds of titles from the 60s through in to the millennium.

Finally, one quick correction: I misnamed the director Norio Tsuruta as Kōji Tsuruta in the episode. If you want to see the embryonic stages of what would blossom by the end of the 1990s, please do go ahead and seek out his Scary True Stories TV/V-Cinema series. They are oddly adorable.

We hope you enjoy this episode, and we’d love to hear your thoughts on J-Horror. Do you have a favourite title you think we need to see? Are there more recent titles you think can stack up to these earlier classics? Get in touch on Twitter @rewindmoviecast, via email at rewindmoviepodcast@gmail.com, or with us directly: you can find Gali on Twitter @galithegreek, I’m on Instagram @quilllicker, and our esteemed guest Matt can be found @mdridley. While we eagerly await his upcoming Korean horror short, you can check out his previous short film The Wilds here (ably assisted in his crew by both Gali and myself!).